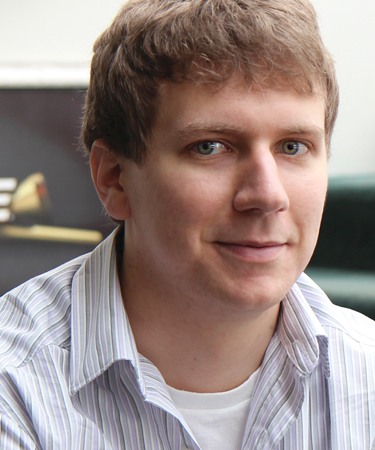 A: I joined IT in March of 2013 as a Mathematician and was recently promoted to the title of Senior Mathematician.

Q: When someone asks what sort of job you have, how do you explain what you do?

A: I’ll say that as a Mathematician I design, program and analyze the models used for slot machine games in casinos.  Usually that’s enough, as the common follow-up question is whether or not I know how to beat the machines and win a lot of money.  They’re always disappointed when I tell them that’s not the case.

A: “Working” at IT never feels like work.  I get paid to do something I really enjoy for something as interesting and exciting as slot machines.  Elaine and Richard have created such a positive, accommodating and friendly atmosphere here.  I’m also surrounded by a great and talented group of people who are passionate and driven to help the company succeed.  The list goes on.

Q: When did you develop an interest in math?

A: Growing up, I always enjoyed learning Math and solving the problems.  In college I was an Environmental Science major where one of the required classes was “Calculus with Applied Biology and Medicine.”  For that class I had an amazing teacher who really taught me to appreciate Math both as a subject and as an application for the real world.  After that course I immediately switched my major to Applied Mathematics and never looked back.

Q: What sort of jobs did you imagine having as a mathematician?

A: I never pictured myself in any specific job.  Post-graduation I pursued being an Actuary and passed one of the exams while working part-time as a Math tutor, but I figured my college courses, knowledge and skills could help me in many positions, so my plan was to simply see what was out there and apply for jobs that sounded like a good fit for me.

Q: How did you get into Class III game development at IT?

A: The position as Mathematician for which I was hired was specifically for these types of games so I was thrown right into it.

Q: How do you come up with new ideas for math models?

A: I will watch YouTube videos of the many games that are out there and think about ways I can change or improve them.  Sometimes the player will make comments about what they’d like to see or expect out of a game when certain things happen, so that can spark some ideas.  I’ll play games at casinos to see what I like and don’t like.  Occasionally I’ll just start drawing a blank set of reels on a piece of paper and see what I can come up with.

Q: How do you work with designers on the math behind slot machines?

A: After the initial Math model is determined and the game is being developed, the designers will have ideas on how to improve/change the game as things move forward.  As a mathematician, I determine if we can afford the changes, how to implement them, etc.  It’s very game-dependent and hard to answer it simply, but the Math and design of the game is heavily intertwined.

Q: Math is what drives slots- so how do you get inside the head of a player and make the math fun?

A: For me, playing the game while it is being developed is a big help.  Others involved in the game’s design will play the game and offer their observations as well.  You notice things that you like and don’t like that are hard to see just by looking at the numbers.  Also, just watching others play the games on YouTube or a casino (or playing them at the casino yourself) can get you some good insight as to what the player likes to see.  You can have two games that look almost identical in terms of the Math and numbers we analyze, but one can perform drastically better than another, so playing them and getting feedback in any way we can really helps with understanding what works.

A: It sounds generic, but I have enjoyed every game I’ve worked on, as each one is different and poses its own challenges and involvement.

If I did have to choose one, it would be “Lady of the Dead.”  It was about 75% done when it was handed off to me, but it was probably the first game I had a hand in that went out the door.  It introduced me to a lot of the basic ideas and methods we use for a lot of the games.  But since it wasn’t complete, it let me get my hands dirty and get used to the process of implementing my work.

My niece also likes the movie Coco, and since the themes are very similar, it’s a nice connection when I think back on the game itself.

Q: What’s something you wish slot players knew about slot machines in general?

A: A lot of people think the machines are just there to trick you and steal your money.  While it’s fairly understood that the machines need to take in more money than they pay out, this industry is highly regulated so that there is nothing fraudulent or misleading happening when you play.  It’s all random and luck can always be on your side.

In terms of our slot machines, we are truly focused on the player’s experience and feelings.  From the Art to the Math and everything in-between is designed with the player in mind.  Win or lose, we want them to have a good time while playing our games and create the games to do just that.

A: When Texas Hold ‘Em was very popular on TV, my friends and I would play a lot of that.  With slot machines, I only went to a casino once before and won $40 playing Kitty Glitter.

A: I think the industry in general is just very interesting in itself.  It’s a competitive market and you never know what features/games are going to do well or what the next big thing will be.  It’s fun to see what other companies along with IT can come up with and how they adapt to the changes in the industry.  It’s very exciting and always keeps you thinking and striving to do well.

A: I never considered having this job.  I never actually knew it was a job until I saw the posting on a job site.  I had the same thoughts as what some have said when I tell them what I do: “Wait, that’s actually a thing?”

A: I would lose plenty of Schrute Bucks and Stanley Nickels playing a slot machine based on “The Office.”