IT'S ON – Incredible Technologies is Ready for G2E 2011 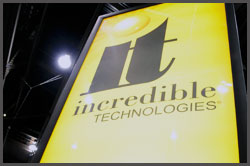 Emerging Class-III gaming manufacturer Incredible Technologies (IT) is planning on making a statement at G2E 2011 that the company's president and CEO, Elaine Hodgson sums up in two simple words, "IT'S ON." The tale of IT's evolvement from leading amusement game manufacturer to contending video slot manufacturer has been a point of industry intrigue since it first began in 2005. Now, the Illinois-based company intends on using G2E 2011 as the perfect venue to define precisely how its Magic Touch® brand of video slot, poker and keno games is worthy of the attention it has garnered throughout the industry. "As an organization we're ready," said Hodgson. "Not only are we showcasing our big ideas at G2E, we're backing them up with sales and earnings data that can not be ignored." 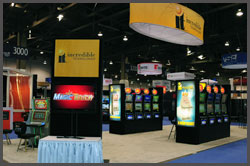 With their largest exhibit to date, IT is bringing over 50 cabinets to G2E including over a dozen new video slot titles in addition to their catalog of GLI approved games. Among the new innovations IT will be showing are new categories in its award-winning Magic Touch Innovation Collection including a symbol-by-symbol line win multiplier feature called Multi-X™ Symbols in its new Family Vacation™ and Rollin' on Route 66™ video slot games. A Mini Games bonus feature will be showcased in IT's new Neon City Casino™ slot in addition to a category of games featuring Random Awards. A new partnership category will be introduced featuring creative titles developed by acclaimed slot development studio, GC2. Finally, IT will be launching follow up titles in its Sidewinder Reels™ and popular Angle Pay™ categories. A new version of Upper Hand Hold ‘Em™ – the company's innovative Hold ‘Em based concept – will also be on display.

This incredible body of work will join a bolstered collection of video poker and keno games now featuring over forty titles and the company's patent-pending ProTip™ perfect play poker functionality.

In addition to this deep catalog of diverse software, IT will showcase its proprietary hardware and cabinetry that is living up to its reputation among the most tech-friendly in the industry. A final version of the company's unique Breeze Slant-75HD cabinet will also be on display and for sale to the industry for the first time.