After months of preparing and developing new games this year, Incredible Technologies (IT) can now say they successfully "brought the heat" to G2E 2012. This year IT casino games exploded across the scene, earning the confidence of operators through strong ROI and attracting players with dynamic and different gaming content. The Illinois-based company known historically as the largest manufacturer of amusement games in the U.S. – and creators of the wildly successful Golden Tee Golf® franchise – has now forged a new name in casino gaming and was prepared to show off their tremendous growth at the 2012 Global Gaming Expo in Las Vegas. 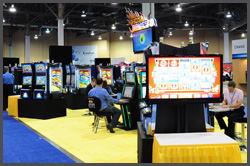 IT president and CEO, Elaine Hodgson says she is inspired by what she saw from the IT team at the show this year. "2012 has been all about growth for IT. Not only have we doubled our sales team and placed products in nearly 100 casinos across 11 states," Hodgson said. "But this month we're also moving our corporate headquarters to a facility twice in size to accommodate our manufacturing demand and increase in staff." She continued, "What I saw from our team at the show was great attitudes and amazing professionalism. There was never a dull moment at our booth as our sales staff was constantly demonstrating our games and proving why our products are unique and valuable to casino operators. We are looking forward to seeing all of our new games hit the casino floors in the coming months. I can safely say that this has been our most successful show to date." 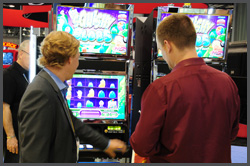 IT showed off its Magic Touch® brand with additions to their award-winning slot collection. The Innovation Collection showcased thrilling new features such as the safecracker mini-games in Johnny Steel: Operation Heist TM, Transforming Symbols TM in Sacred Stones of Alchemy TM and PowerBox™ multipliers in Ultra Mega™. New titles in IT's Traditional Collection included Squishy Blobs TM and The Herd TM. IT's Strategic Partnership Collection debuted the much anticipated Crazy Money Millionaire™ – the sequel to the wildly popular Crazy Money™ - by High Point Entertainment. IT was also proud to show off their first licensed game, Munsters: Family Portrait™ which features hilarious footage from the original show and a Slide & Win™ reel and two quirky bonus rounds. This was shown alongside Lock Down™; both games were designed by acclaimed slot developers GC2 Inc.

IT showcased its proprietary hardware and cabinetry that has continually proved to be one of the most tech-friendly in the industry. An updated version of the company's unique Breeze Slant-75HD cabinet was also on display.